"For the better part of half a century, John Barth was synonymous with what was the last self-conscious attempt at constructing a universal aesthetic movement speaking for all of humanity but recognizing only its bourgeois, white constituent. Much like Virginia Woolf once could claim that 'on or about December, 1910, human character changed,' Barth would argue (with about the same dose of provincialism) that literary modernism was over. [...]"
Read more 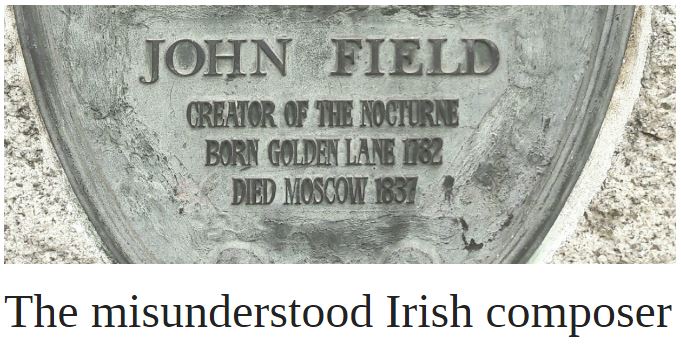 "Composer/pianist John Field’s birthday serves as a reminder of the uncertainty that underpins his reception. On the twenty-sixth of July, we ostensibly celebrate Field’s birthday. Whether he had been born the day before or after makes little difference; I only highlight it here to demonstrate the extent to which numerous oversights have significantly altered our perception of Field. It throws into question then, how much do we really know about the Irish-born musician as he turns 235? [...]"
Read more

"This year marks the 137th anniversary of the birth of Seán O’Casey, one of the best-known of all Irish playwrights. His works first enthralled audiences at Dublin’s Abbey Theatre during the 1920s, and in the years since then his dramas have been repeatedly revisited by actors and directors. In particular, O’Casey’s Dublin dramas have repeatedly appeared onstage in some high-profile stagings during the past twelve months. [...]"
Read more